And the purified water flows! 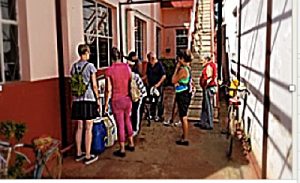 In the four months since we helped install the Living Waters for the World (LWW) system in Nueva Paz, our Cuban brothers and sisters have been busy serving their community.  We’ve received two reports from Saskia detailing system health, community education and Operator training, also noting the gallons of water purified and served to members of their congregation and community.

While we were there in April, our team leaders from Mississippi conducted extensive training of the four primary Operators of the system, all of whom are long-time members of the Nueva Paz congregation:  Saskia, Yosbeni, Juan Carlos and Pepito.  Since that time, these lead Operators have enlisted two additional congregation members (Yunia and Sandra) to be trained as Operators, ensuring continued support of the system should something prevent one of the original team from serving.

According to their recent reports, during the month of May, the system processed 4031 gallons of water, which was used both by the church and by an estimated 1000 people from the community.

June’s volume was 4634 gallons; July’s was 5071 gallons, again having served around 1000 members of the community.  So during the first 3 full months of operation, the system has already produced 13,736 gallons of purified water!

The team of Operators continues to test the system and has not experienced any major maintenance issues to date.  As expected, filters continue to be effective and it appears that only minor adjustments have been necessary. It’s also important to note that, in addition to regular and detailed testing performed by the trained Operators, the Directorate of Public Health has also conducted several tests of the water and has found it to be again, as expected, purified and “of an extreme quality.”

This LWW system, made possible by PCWS’s gifts and prayers, as well as the gifts and prayers of our friends in Mississippi and Nueva Paz, has truly allowed our friends and partners to minister to their community in even greater ways.  Three times a week, the water is processed and served to a line of people “thirsty” for purified water for drinking, cooking, brushing their teeth and caring for their babies.  It’s a huge step toward improved general health for residents of all ages and, while this service requires a LOT of work for the Operating team and the people of the Nueva Paz Presbyterian congregation, it’s work they’ve embraced as their collective Mission.