Building our partnership with the church in Nueva Paz 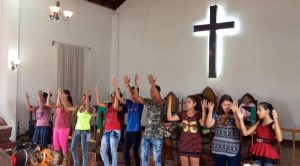 Since that first visit in 2008, Jane Boxell has led several PCWS groups on nearly annual trips to Nueva Paz, a small rural community approximately 40 miles southeast of Havana.  Fundamentally a “relational” partnership, regular visits and personal interaction are essential to growing and deepening the partnership, as are the basics of sharing our faith and friendship and focusing on the things we have in common.

Basic medicines are generally in short supply in Cuba so, over the years, PCWS members who have travelled to Nueva Paz have brought multiple suitcases filled with donated over-the-counter medicines.  We also collect and bring craft items, bedding, clothing, computers, books, friendship banners, etc.  The craft items are used in the children’s Sunday school classes and by members of the women’s group who make a variety of items they then sell to support themselves and the church.  Books have been used to establish a library in the church.

The Nueva Paz congregation also appreciates any funding we can provide to supplement their programs, so PCWS Mission includes Nueva Paz in our budget every year.  And in addition to more recent fundraising efforts you’ll see throughout this site, several years ago, PCWS worked in partnership with another congregation in Long Island to raise approximately $20,000 for a car for the Nueva Paz pastor.  Incidentally, a significant amount of the funding for our half of the car fund was raised through the collection and recycling of aluminum cans which we still do today to support our efforts in Cuba!